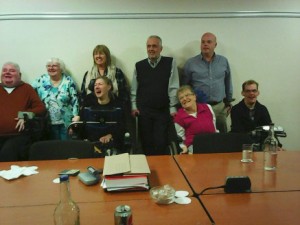 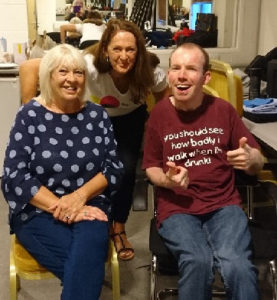 Here at The Sequal Trust our communication disability charity would not be what it was without the hard work and dedication of our staff, trustees and patrons. Without them, supplying communication aids for disabled people would be entirely up to the health services and the families of the individuals, which can take a long time and be extremely expensive.

The team at The Sequal Trust have a good understanding about assistive technology for communication and are available by phone or email to answer any questions you may have about specific devices. Having funded devices such as lightwriters, eye gaze’s and Grid pads to people with communication disorders, for many years, innumerable members have had their lively minds set free.

The Sequal Trust charity trustees are responsible for running the charity and are very aware of the revolutionary effect communication equipment can have on the lives of those who need it. Many of them have a form of disability and themselves use adapted equipment on a day to day basis.

Our President – The Hon Nigel Havers

Well known for his extensive acting career and charity work, Nigel Havers took over the presidency of The Sequal Trust from his father, after his death in 1992.  Since then, Nigel has worked with the team and is proud to be working with alongside the team and the trustees, to provide communication aids that change lives and inspire people to reach their full potential.

Our patrons have worked with The Sequal Trust for many years, both in supporting roles and raising awareness of the work we do and the conditions that effect our members.

Professor Stephen Hawking came on board as a patron of The Sequal Trust in 1992 and was most famous for his scientific theory on black holes, and for his use of a specialist communication aid. He was diagnosed with motor neurone disease when he was just 21 and the condition saw his mobility and eventually speech decline until he was unable to walk or talk. Using a switch aided communication device to help him express himself, he became one of the best-known users of augmentative communication technology. Since his sad passing in March 2014, Professor Stephen Hawking remains a posthumous patron of The Sequal Trust and acts as a true inspiration as to what can be achieved with the right communication equipment.

As one of the original founders of the Possum Users Association (PAU) which preceded The Sequal Trust, Roger was involved with the creation of the communication disability charity and has been an active member ever since. As an activist, Roger is also involved with many other disability charities, including wheelchair sports charity, Wheel Power.

Most well known for being the 2018 winner of Britain’s Got Talent, Lee Ridley is the first known stand up comedian to use an electronic communication device in his show. Even before he won the coveted slot on the Royal Variety Show, Lee had been operating as a stand-up comedian in his home town of Newcastle for many years and had even performed at The Edinburgh Fringe Festival. Many of his sketches tackle disability and a radio show he wrote in 2014 won BBC Radio’s best new comedy award.

As a long-standing trustee and former chair of The Sequal Trust, Dorcas is a valuable member of the team. She has been writing books since the 1960’s about disability issues, inspired by her experience as someone with cerebral palsy. Dorcas was awarded an MBE at Buckingham Palace by Prince Charles, thanks to her work as the vice chair for Wellingborough CCL for the disabled.

Princess Michael has been very supportive of The Sequal Trust over many years and we are very honoured to have her on board as a patron.